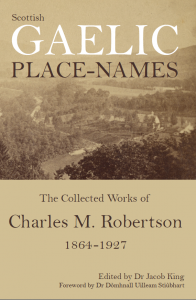 Rev. Charles M. Robertson (1864-1927) was one of the greatest Scottish Gaelic scholars of the late nineteenth and early twentieth centuries. A native of Strathtay in Perthshire, his work as a minister took him round the Highlands to places such as Arran, Argyle, Lochaber, Inverness-shire, Nairnshire, Sutherland, Wester Ross, Skye, Jura and Islay, as well as his native Perthshire. For over thirty years Robertson rigorously gathered detailed information on place-names, dialect and folklore from local Gaelic speakers. He did this at a time when Gaelic was still the dominant language in these places, and much of the information that he gathered, especially place-names, would have otherwise been completely lost to us were it not for his surviving notebooks.

This book brings together for the first time Robertson’s published and unpublished material on place-names. The main portion of the book has two parts. The first comprises both his published and previously unpublished articles about place-names. The second part comprises transcriptions of his unpublished place-name notebooks. These contain over eight thousand Gaelic name forms, with associated folklore and linguistic notes made by him. The book also has a full introduction which puts his work into context, as well as an exhaustive index.

Dr Jacob King was awarded a PhD at the University of Edinburgh in Scottish river-names in 2008 and in the same year began working for Ainmean-Àite na h-Alba, the organisation responsible for providing authoritative forms of Gaelic place-names for use in the public sphere. He is the author of a number of articles, including a column about place-names in the Gaelic page of The Scotsman; he is also co-author of the Scottish Natural Heritage ‘Gaelic in the Landscape’ series.

‘This book is a must-have for anyone with a serious interest in Scottish place-names. It represents a magnificent achievement by Dr King, making available for the first time the work of Rev. Charles Robertson, one of the great unsung heroes of Gaelic scholarship in general and Scottish place-name studies in particular.’

Welcome to the Ordnance Survey (OS) open source digital map. This is a tool you can use to study ... END_OF_DOCUMENT_TOKEN_TO_BE_REPLACED